Robinsons is the master of brand evolution. It’s why the brand continues to thrive 200 years after it was first tasted.

The much-loved brand’s origins can be traced back to 1821 when entrepreneur and philanthropist Matthias Archibold Robinson went bankrupt. The businessman had set up his own grocery business in the late 1700s and was initially highly successful. He devoted a sizeable portion of his time and profits to charity and supported patients who could not afford hospital treatment. When he was declared bankrupt in 1821, he worked hard to clear his debts and it was at this time that he invented and patented his Barley & Groats Powder, originally advertised as an ingredient for puddings and a thickening ingredient for soups. His invention turned his life around, won royal approval from Queen Victoria and became a central part of British history.

Today, 11 million households buy Robinsons with three million glasses drunk every day. It has been embedded in the fabric of daily life for generations. It is a brand that has never stood still, and every marketing manager who has had the honour of captaining the much-loved Robinsons ship has felt the excitement but also the weight of responsibility. Each one has understood that Robinsons must evolve in line with the times, in order to thrive. This means making bold choices.

If we look back on the last few decades alone, we expanded the Robinsons brand to create a kids drinks category with Robinsons Fruit Shoot, we’ve created Robinsons Minis (Squash’d) and Robinsons ready-to-drink (Refresh’d), Robinsons Fruit Creations and Cordials. We’ve created Robinsons on tap at various hospitality outlets, removing the need for bottles. We removed all added sugar in 2015 and we created double concentrate to maximise the number of serves per bottle to reduce packaging and our carbon footprint.

Most recently, we listened to our consumers, and we took another leap. We decided not to renew our partnership with Wimbledon and instead focus on a more accessible programme. Robinsons drinkers told us that they want to have fun, they want to feel good physically and mentally and they want to spend time together with friends and as families. We wanted to help make this possible, not just by packing our Robinsons full of fruit and removing added sugar but by giving people a reason to get moving and laughing whoever they are, wherever they live, and whenever they feel like it. This is why we created the Big Fruit Hunt, an augmented reality game that families of all ages can play on a smartphone any time anywhere, which encourages people to get out and find virtual fruit to win prizes. There are no tickets, anyone can play with the click of a button.

As a brand, creating joy, fun, and excitement sits at the core of Robinsons. We wanted to find a way to make this kind of joyous wellbeing accessible to all in a fun, fresh and modern way and with the Big Fruit Hunt, we’re taking another exciting step on the Robinsons journey. The evolution goes on. 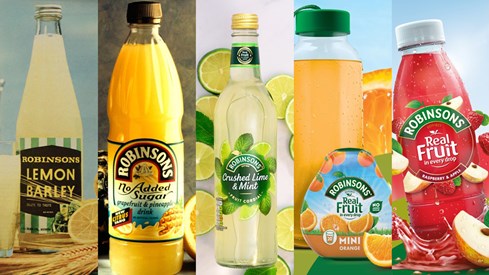